My Worst Impulse Purchase. Ever.

That is the Oxford Living Dictionary's definition of "impulse purchase".

My definition of "impulse purchase" is virtually identical but with the addition of several swears, one or two, quite possibly three, facepalm emojis and a bunch of these "!!!!!!".

I'm not really a "shopper" and as such, I don't do much shopping. Being somewhat of a miser and being a wholewhat of a hermit kinda work together to preclude me from being a prime candidate for Shopaholic status so I've always considered myself safe from the perils of impulse buying.

Until this past Monday.

Twas the Day After Mother's Day...and Katy, having had to work on actual Mother's Day, was treating me to a lovely Mama/Daughter afternoon of lunch followed by a visit to my favourite store to pick out a Mother's Day wee giftie of my choice. (followed by her waiting in a dentist's waiting room for an hour while I had my teeth cleaned...but that's not an integral part of this story)

Lunch was at a neat little place called "Shine". It's a vegan juice bar and cafe so it was delicious AND nutritious. Since I have spent the winter focusing primarily on the delicious, I am in dire need of the more nutritious side of things, this extremely healthy meal left me feeling quite proud of myself. (I didn't know then that blissful feeling of pride was soon to be crushed...in a big big way.)
Katy insisted on paying for our lunch.

Having an adult child who is gainfully employed ....and generous...is so much fun!!

We strolled up the street and into my favourite shop,  The Bird House Nature Company.

I had my heart set on getting an oriole feeder (I know these guys are hanging around our little neighbourhood and I wanted to lure them over to my house...a story of heartbreak and joy that I may recount at a later date)and I immediately began to hmmmm and haaa my way around the oriole feeder display.

After several minutes of this, Katy says,

"I'll leave you to it. I'll be over there petting the cat."

Can't say that I blamed her.

I'd also rather pet the store cat than watch me/be me trying to make a decision about which one of two possible oriole feeders to buy. My decision-making skills (or lack thereof) annoy/bore me at the best of times, I can only imagine what it's like to be on the outside looking in.

As a wise old philosopher once said, " I know one thing...indecision may or may not be my problem."

I eventually DID make my decision (emphasis on the "eventually") and selected a beautifully tacky, orange plastic oriole feeder. Apparently, orioles' taste in feeders veers rather dramatically away from the subtly rustic theme I've been cultivating with my feeder station.

Ah well...à chacun son goût.
(and, yes, I did Google that to make sure I got the accents right)

We made our way to the cash counter and Katy pulled out her wallet(again) to pay for my Mother's Day gift and I told her that lunch was more than enough of a treat and I had been planning on buying the feeder since last summer and then I paid for it myself.

While it's fun to have gainfully employed and generous children, it's also fun to tell them to put their wallet away.

Now...believe it or not...the big, tacky, bright orange plastic bird feeder was NOT my regretful and ridiculous impulse purchase. As previously mentioned, I have been intending to buy one of those horrible looking things for months...so there was zero fast and/or last minute decision-making involved in that purchase.

After I finished paying for my feeder and box of powdered oriole food, Katy turned to leave the store and I grabbed her and said,

And this is where the wheels fell off.

We wandered around the store looking at all the fun stuff and happened upon a small and tasteful display of felt cat beds.

They were not inexpensive.

But they WERE awesome.

For those of you unfamiliar with felt cat beds, you can take a peek at a sampling here.

I thought they were a hoot and Katy did too...and we giggled and tee hee'd at the thought of our two guys hanging out in these things.

It totally cracked us up.

And then she said...

"You should buy one!"

"YES!! Which one? They're all hilarious! Except maybe that one. I don't know what that one even is."

So we quickly discussed the merits and demerits of a couple of them and settled on one that we figured they could both fit into...they like to snuggle.

And then I gave my head a quick shake and said,

And then she said,

"We can go halves and it can be your Mother's Day gift from me and you to you."

And we giddily walked back up to the cash counter with our expensively hilarious felt cat bed and bought it.

When we got home, we rushed inside and woke both cats up and plunked them down in front of their uproariously clever new bed and they crawled right in and cuddled up and loved it and that's where they spend all their time now and we get to giggle whenever we see them using it and think to ourselves,

"Man oh Man!! That was the BEST impulse purchase we've ever made...EVER!!"

That's not what happened.

They had no interest in it.

...even when we tried to lure them in with treats.

They stuck their heads in and ate the treats and walked away and haven't looked at it since...not even to sleep on top of it.

Wanna see a photo of this glorious, over-priced and under-used piece of  cat bed craftsmanship?

Oh....and it's supposed to be an apple. (It seemed much more hilarious in the store...I guess you kinda had to be there.) 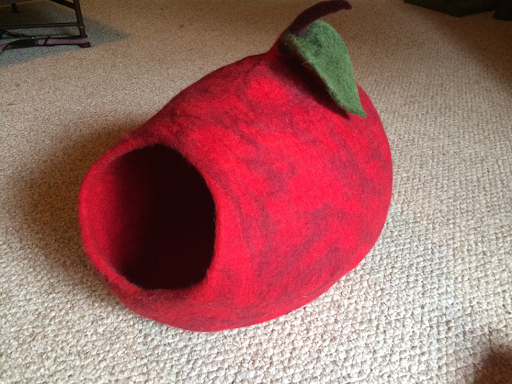 Now here's a video of it in action:

...I placed an empty Liquor Store bag beside it as an experiment.

Here is another riveting video of the cat bed:

...only this time I added a plastic bag.

Anyone in the market for a Not-Even-a-Little-Bit-Used, fancy, Supposed-to-Look-Like-an-Apple super hilarious felt cat bed??

I might have to rescind that most generous offer!

Maybe if I put the plastic bag INSIDE the bed, the cats might actually use it...

😂 Oh Karen that's exactly what I would do and our two cats would be so ungrateful as well! Thanks for the good chuckle. 😂

Maybe it smells like Rainbow? (cat from the store) Are cats like dogs that way?
I think it is super hilarious as well! Will it fit on your head?
Good to have you back!!!
Please Sir, may I have some more?

We have a battery operated ball with a spring that holds a few feathers. Moon looked at it, and walked on by. But he will play fetch for minutes with a crumpled up cupcake paper. Go figure. :)

Good to see you back on the t00bz, Squirrel E. Girl.

That paper bag video was hilarious... as much as I love cats, they're kinda jerks.

squirrel_e_girl
Just to make sure that I'm starting out on the up and up, I should probably disclose the fact that the profile pic I've posted isn't really me. It's a Squirrel who goes by the name Scaredy and NOT a girl who goes by the name of squirrel_e_. (**I should probably also say that Scaredy Squirrel and all things related to him (including my profile pic) belong to the most excellent Canadian children's author, Melanie Watt. I'm just borrowing the picture. I will give it back. I promise.) I have always gotten a huge kick out of squirrels. For years, I have fondly placed the blame for the swift-moving, erratic and sometimes frantic inner-workings of my mind squarely at the feet of the lunatic squirrels who reside inside my head. (BTW- that's figuratively inside my head. I'd have to be a real freak-show to have them literally residing in my head. I keep the live ones in my closet.) Hopefully, this little blurb will explain my choice of title for this blog-Future, past and present posts will be swift-moving, erratic and sometimes frantic ... just like my beloved squirrels. Beware: This blog may contain nuts.